This page discusses the roles of the Nevada Test Site, the facilities, locations, and also gives an insight of the nuclear tests the Department of Energy (DoE) conducted here above ground and underground, illustrated with Official images from the Department of Energy. Some of the tests on this page were carried out by the DoE on Eniwetok and Bikini atolls in the Pacific Marshall Islands.

Although not directly related to Black Projects, the NTS covers a large part of the restricted Nevada Test and Training Range (NTTR). The airspace of the NNSS is sometimes used for the Area 51 test flights.

After the end of the Cold War, and especially since the beginning of the War on Terror, the role of the NTS has changed into a test site for anything related to national security, countermeasures etc. Consequently the site was renamed to its current name as Nevada National Security Site (NNSS). However for the purpose of this article about the history of the site we will still refer to it as NTS.

The Nevada Test Site is managed by the Department of Energy and is the largest known energy research area in the world. From Mercury in the south it extends north up to the Tonopah Test Range (TTR). The NTS is most famous for the Atmospheric and Underground Testing done here in the 1940's to 1960's. Large scale nuclear tests ended in 1992 but the NTS continues to conduct tests with low yield nuclear detonations below ground that do not leak radiation into the atmosphere. The NTS also conducts very large conventional explosions for military and peace time uses. Peaceful uses include the use of high yield explosives (including nuclear) for clearing land.

The NTS includes long term waste storage areas. Nuclear and other hazardous waste is stores in buried pits or in underground tunnels.

One area of the NTS is dedicated to tests involving very large explosions. The Big Explosives Experimental Facility (BEEF) is a hydrodynamic testing facility, located in Area 4 of the NTS, about 95 miles northwest of Las Vegas. The need for the BEEF site originated when, due to community encroachment near the Lawrence Livermore National Laboratory (LLNL) facility in Livermore, California, DOE was no longer allowed to perform large high explosive experiments at the facilities Site 300, Shaped Charge Scaling Project. Therefore looking at the Nevada Test Site as a location to continue to perform these large high explosive experiments, two earth-covered, two-foot thick steel reinforced concrete bunkers, built to monitor atmospheric tests at Yucca Flat in the 1950s, were located and found to be ideally configured. The facility consists of a control bunker, a camera bunker, a gravel firing table, and associated control and diagnostic systems. The facility has conducted safely conventional high-explosives experiments using a test bed that provides sophisticated diagnostics such as high-speed optics and x-ray radiography on the firing table, while operating personnel are present in the bunker.

In order to conduct large conventional high-explosive experiments on the site firing table while operating personnel are present in the control bunker, it first had to be certified as safe. To achieve this, scientists conducted Popover -- a series of high explosive (up to 7,800 pounds) tests which were detonated 27-feet from the bunker's buried outer wall. The test data was used to develop an effects profile that defined the relationship of the high-explosive charge size and detonation point to blast effects, such as overpressure, bunker wall strain, dynamic response (acceleration), and noise amplitude. Together these results demonstrated that the bunker would provide a safe working environment.

The Big Explosives Experimental Facility will play a large role in accumulating data supporting Stockpile Stewardship, along with a variety of new experimental programs that will expand this nation's non-nuclear experiment capabilities. This facility complements the U1a complex and other DOE hydro diagnostic facilities. (DoE)

The U1a Facility is an underground experimental complex at the U.S. Department of Energy's Nevada Test Site. The U1a complex supports routine test site activities in which high explosives are detonated to test the readiness of equipment, communications, procedures, and personnel. Test data will help maintain the reliability of the nuclear weapons stockpile by allowing scientists to gain more knowledge of the dynamic properties of aging nuclear materials. Of particular interest is data on the behavior of plutonium that can be used in computer calculations of nuclear weapon performance and safety in the absence of actual underground nuclear testing.

The complex is located in Area 1 of the Nevada Test Site, approximately 90 miles northwest of Las Vegas. The complex, consisting of horizontal tunnels about one-half mile in length, is at the base of a vertical shaft approximately 960 feet beneath the surface. It was excavated in the late 1960s for an underground nuclear test which was later canceled. In 1988 the shaft was reopened and a 1,460-foot horizontal tunnel was mined south at the 962-foot level of the shaft. In 1990 the Ledoux nuclear test was conducted in the tunnel.

The vertical shaft is equipped with a mechanical hoist for personnel and equipment access while another vertical shaft about 1,000 feet away provides cross ventilation, instrumentation, utility access, and emergency egress. On the surface, there are several temporary buildings and instrumentation trailers. The most distinguishable landmark at the complex is the white air building which was used for experiment assembly during Ledoux.

Map of the different areas within the NTS. Click here for a larger map showing sites of interest in the NTS, including Area 19. 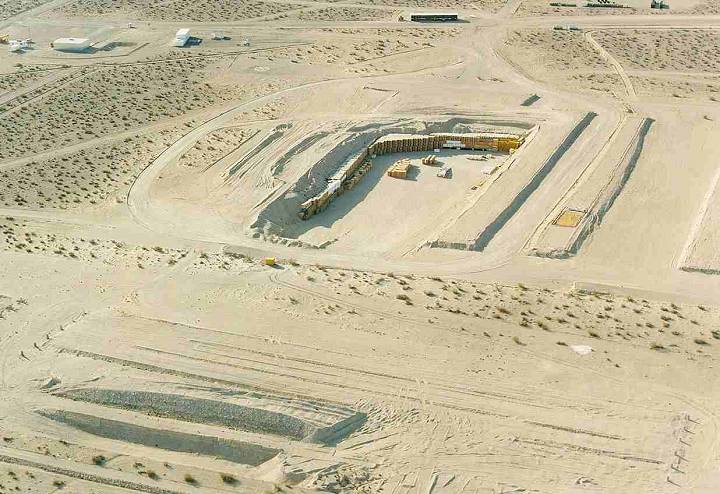 Hazardous waste storage in Area 5, including dangerous chemicals and low-level radioactive waste. Containers with the waste are stored in open pits and covered with a layer of dirt when the pit is full. Source: DoE

Map of the waste disposal management areas, including Area 5 (Frenchman Flat) with the storage pits shown above. 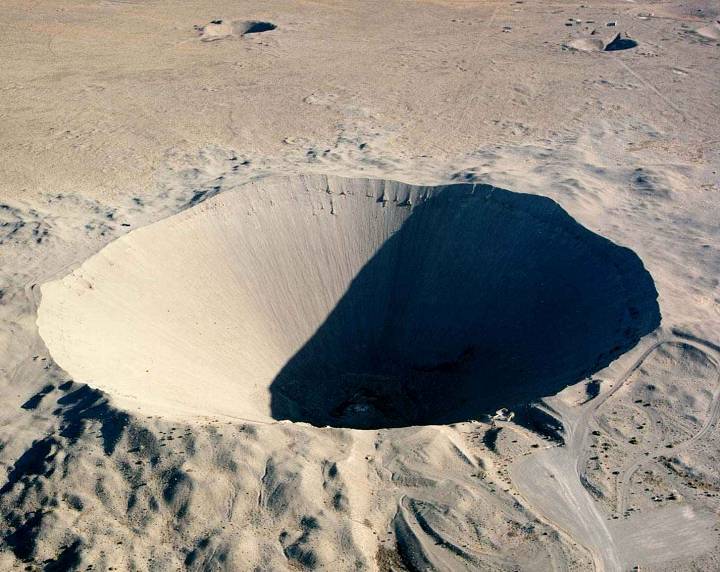 Sedan Crater in the northern part of the NTS. It is not far from Station 700, the guard post to Area 51. The crater was formed in a series of tests called Project Plowshare, conducted by DoE to test the use of nuclear explosions for peaceful construction and excavation purposes. Sedan is one of the largest craters in the NTS. The test was conducted on Yucca Flat Proving Ground. Source: DoE

From this image it is hard to imagine the scale of this crater. The road in the bottom right hand corner is easily wide enough for two vehicles. The Crater is a massive 320ft deep and 1280ft wide.

Sedan Crater was made by a 100KT device. That is equivalent of 100,000 tons of TNT explosives. The detonation occurred 635ft below ground, 315ft below the bottom of the newly formed crater. The resulting detonation displaced over 12 million tons of soil and sand. The sand at the bottom of the crater is fused together by the extreme heat.

Above Sedan Crater in the photo are two smaller test sites from low yield Kt devices. 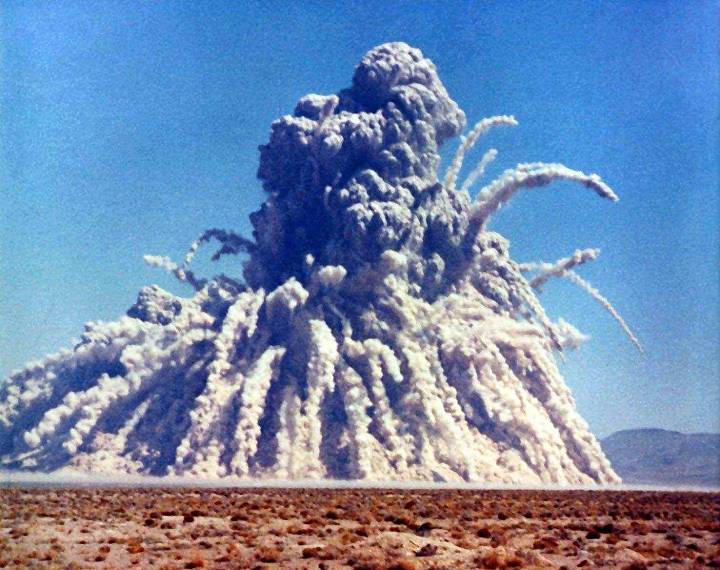 Photo of the 100Kt blast that formed Sedan Crater. Along the ground is an incoming shock wave of dust. This impressive photo shows 12 million metric tons of earth being displaced in an instant. The photo was taken from several miles away. Source: DoE 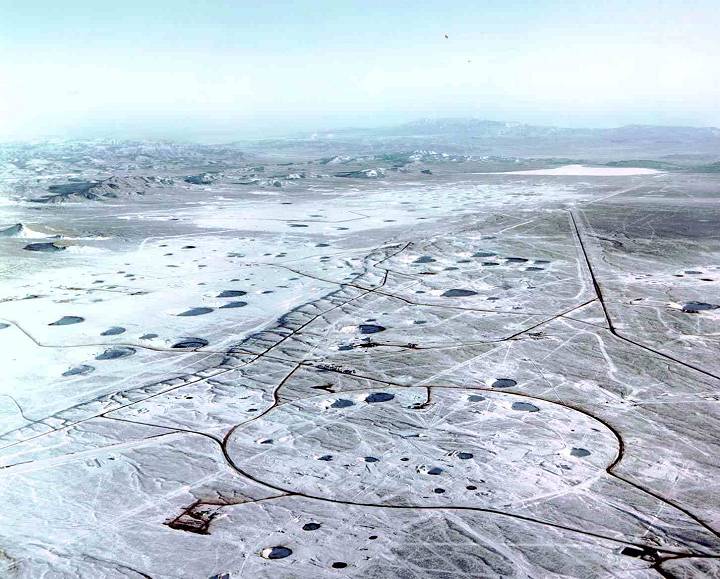 Photo of the northern part of the Yucca Flat test area where most of the tests were carried out, including Sedan. It is riddled with craters from several hundred tests of various yields. The dry lakebed in the background is Yucca Lake. Source: DoE

Please also see NTS Part II  - MORE IMAGES and information including above ground tests, the stages of a nuclear air burst and the effects on people, animals and on buildings!