Air Force Plant 42 is located at Palmdale, California. It is just a few miles south of Edwards AFB.
The Facility has now become synonymous with advanced and black aviation programs. It became most famous when Lockheed Martin relocated their aviation manufacturing plant nicknamed 'Skunkworks' from Burbank to here after the 'Have Blue' program had moved out. It has now become 'the' place for Advanced Black Programs development and construction.
It became known as Air Force Plant 42 in 1953 officially and was taken over by the Air Force in 1954.

Situated on site are three main aviation contractors/companies and these are:
Lockheed Martin
Northrop Grumman
Boeing
Plus Rockwell (Boeing North American) used to be located here.

The most famous aircraft to come out of Plant 42 is the Northrop B-2A Spirit when it was first rolled out in the mid-1990's.
Since then various programs have undergone construction here, some extremely secretly and some not.
An example for a not-so-secret program is the current Joint Strike Fighter (JSF) Program constructed at Lockheeds Plant in co-operation with Northrop's Site-4 where the then, very classified B-2A was constructed.
It is at nighttime when secret aircraft may fly out of here, either taking a very short trip to Edwards AFB North Base or to Groom Lake and Tonopah. However a lot of secret programs are actually flown inside of a C-5B/C Galaxy to conceal them further while transitioning from Plant 42 to the test sites. Some aircraft when being transported are not even ready to fly.
And so transporting in a C-5C or C-17A is essential.
On a day to day basis, driving past this huge joint facility you may be able to see F-117 Nighthawks, B-2A Spirits and various other aircraft associated with the contractors on site such as Orions, Stratotankers and the like.

Plant 42 has an area of approximately Nine ²miles which is about 5,840 acres. Before the plant was here, only Lockheed existed with a small site. Since then it was to become Palmdale International Airport but that was canceled and it was then that major aviation contractors moved in.
Since the Aviation industry moved here however, Palmdale airport has arisen again and it is now a civil airport (Palmdale Regional) as well as construction facilities. Cargo and Passenger transport has got busier by the year here.

There are three main facilities within Plant 42 now, these are: Lockheed Martin, Northrop Grumman and Boeing / Rockwell. Rockwell were based here back in the 70s and 80s and actually built 100 x B-1B Strategic Bombers here as well as constructing all of the NASA Space Shuttles.
The whole facility in one is the main construction, modification and test center for the United States Advanced Aviation programs although many modifications go on here on less exotic aircraft such as the Orions, passenger aircraft and other fast jets.
Plant 42 is owned by Detachment 1, Aeronautical Systems Center, based at Wright-Patterson AFB, Ohio. It is assigned to various companies such as described above.
Sites 1 - 8 are owned specifically by the Air Force but are contracted out.
Site 9 is owned by Boeing North American and incorporates the former Rockwell's Area.
Plant 10 by Lockheed Martin (Skunkworks)
However Site 9 was owned by Rockwell and Boeing took over when Rockwell finished the B1 construction.
Site 9 was up for sale recently by Boeing Reality Corp and offers a vast amount of Hanger space of which a company called SR Technologies bought it. This company overhauls Transport aircraft and has a major deal with FedEx there at the moment.
One company that was interested was British Aerospace Systems' "Marconi Flight Systems" company who at the moment reside at Mojave Airport doing re-fits of the KC-135R and other aviation/space related programs. It is a major player in the modification and rebuild of aircraft for the three major Forces as well as British forces.
Within the Air Force Detachment 1 owned Sites 1 - 8, Boeing reside in Site 1 and Lockheed Reside in Sites 2 and 7, as well as the large Skunkworks which is Plant 10. Northrop reside is Site 4 and others.

Attraction to the area for the aviation companies was the main runways and ramp/taxi space. The main runway 07/25 is 12,000ft in length and is the strongest runway in the world, built to withstand an 8.3 Earthquake. (Plant 42 is near the San Andreas Fault). It also has some of the best fire fighting equipment in the United States and the fire crews are some of the best trained in the country.

When Rockwell were building the B1B Bomber and also building the Space Shuttles, personnel at Plant 42 rose to above 12,000 people. Since then, dwindling funds and contracts and companies going bankrupt has forced the loss of jobs and the personnel figure for today stands at approximately 9,000 people. Most of which work at Lockheed and Northrop. 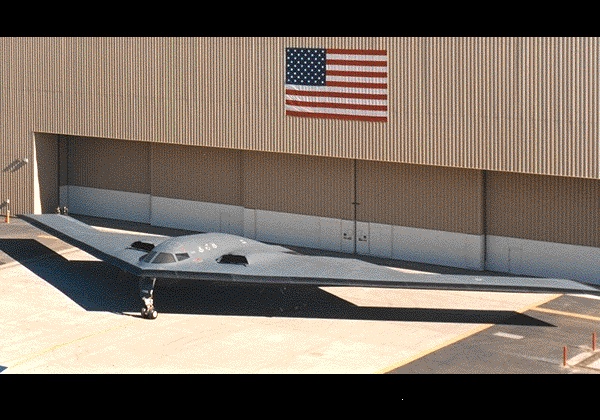 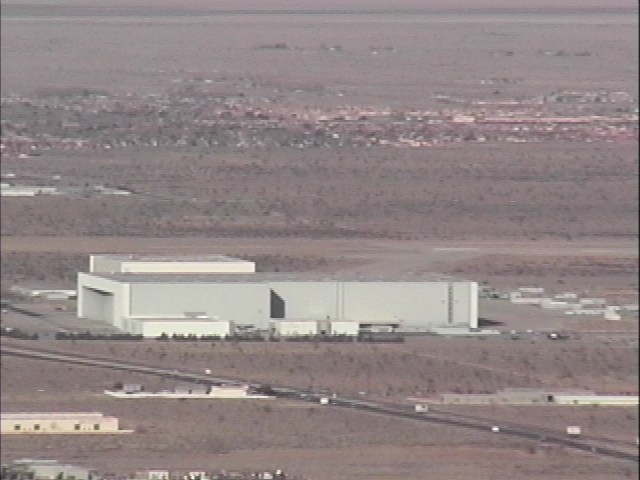 Image: Palmdale Webcam .
Above is the huge facility of Lockheed Martin Plant 10, a.k.a. Skunkworks. It is a massive building and is where most of Lockheeds Black Programs are constructed and modified. 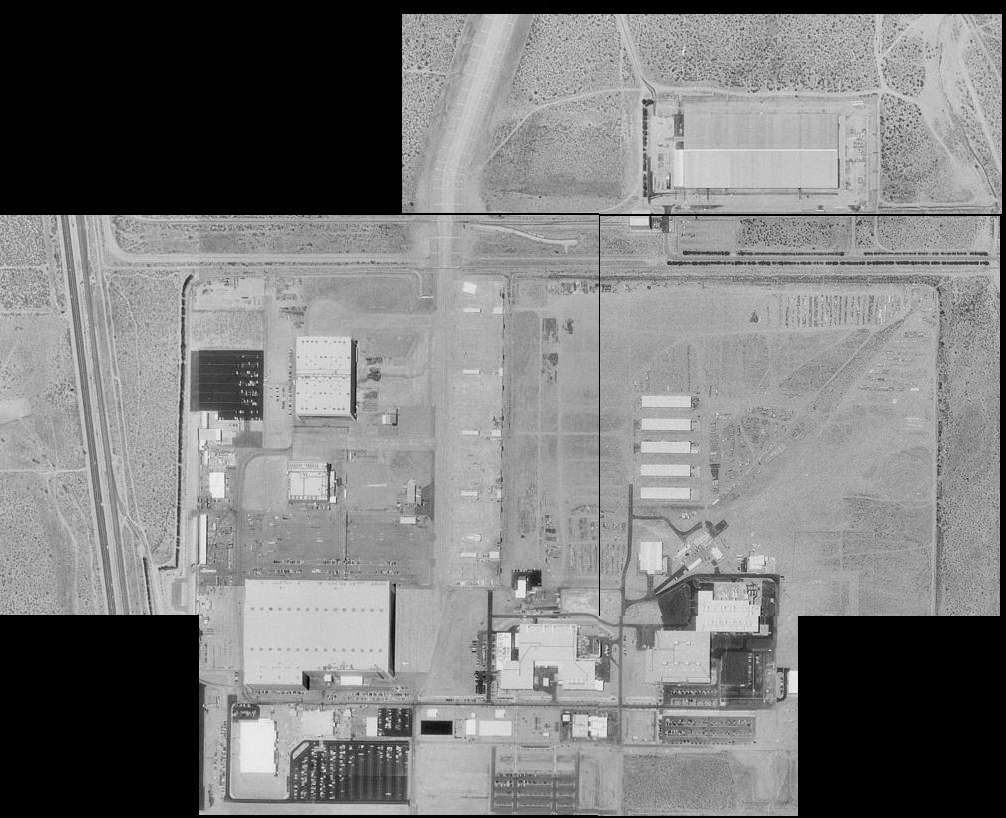 Image: Courtesy of United States Geological Survey
Above is Lockheed's Main Plant. The largest building is part of Site-10 and is 'Skunkworks'.
On the ramp outside of the Skunkworks building (right edge) is a white object parked up. 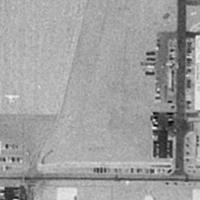 Looks like a Cessna 172 but could be some kind of small RPV. 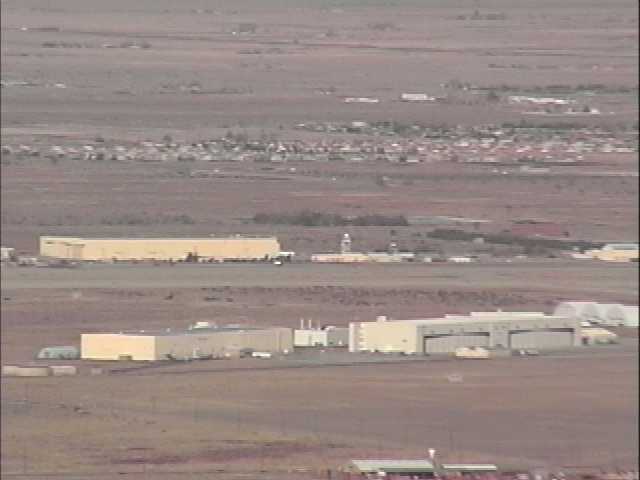 Image: Palmdale Webcam .
Seen above is Lockheed Martin's other sites: Site 7 and 2 with site 7 in the foreground and 2 in the background.
Nearly out of sight and not very visible are two SR-71 Blackbirds, which if you look carefully are located on the right hand side of the picture, to the left of the far right building which is a Black blot....this is actually aircraft....see below.

Image courtesy of United States Geological Survey
Above is Site 2 of Lockheed Martin, however owned by the AFFTC.
You can see three black SR-71's with a possible A-12 also. On the left hand side of the satellite image is an SR-71 and beside this, another Blackbird but covered by protective white coating. This can be seen below the lone Blackbird. The Two Blackbirds together on the right hand side are the black blobs you can make out in the photo above. 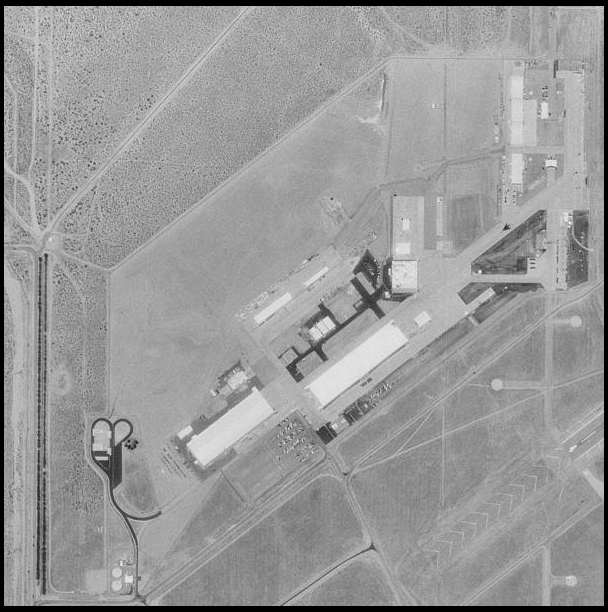 Image Courtesy of United States Geological Survey
Above is Site 7 of Lockheed Martin and can be seen in the foreground of the Photograph above taken by PalmdaleCam.
You can see one of the prototype F-117A Nighthawks on the taxiway. This is an aircraft that stays at Plant 42 for trial work on avionics and other modifications. It does not have the same avionics suite as the standard Nighthawk in service.
All F-117A overhauls take place here as well as other programs. 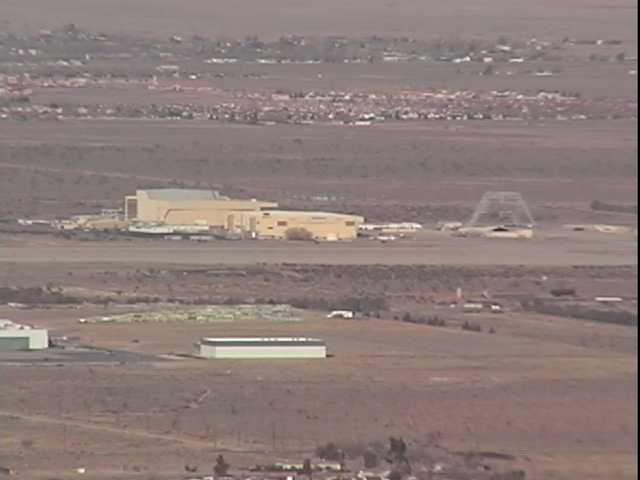 Image: Palmdale Webcam .
Above is Plant 42, Site 1, the Space Shuttle final assembly facility. All shuttle final assembly was performed here. The Mate/De-Mate device is visible to the right of the building. In the foreground, the white buildings are part of the Lockheed Martin "Skunkworks". 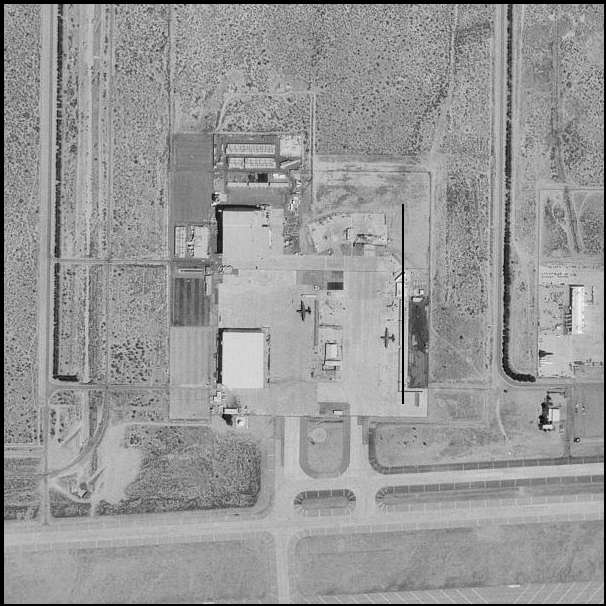 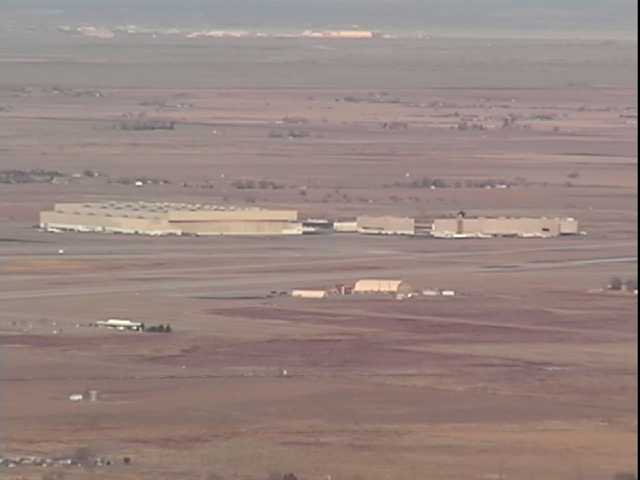 Image: Palmdale Webcam .
Above is Northrop Grumman's main facility and is where the B-2A was constructed. In the background is Edwards AFB to the north of Plant 42. According to news releases, Site 4 is where the JSF is being developed by Northrop and Lockheed and it was picked by the DoD as a site for development. This was once an extremely classified area when the B-2A was being developed.

Image Courtesy of United States Geological Survey
Above is Northrop Grumman's Facility with Site-4. Outside to the right of the picture you can see two B-2A Spirits on the ramp. They are air structural test articles AV-0998 and AV-1000.
Site-4 is now used by both Lockheed and Boeing for the J.S.F Program. Site-4 used to be the most classified facility in the Plant when the B-2A was in development and construction.
You can see by this comparison the size of the building...to the B-2A. 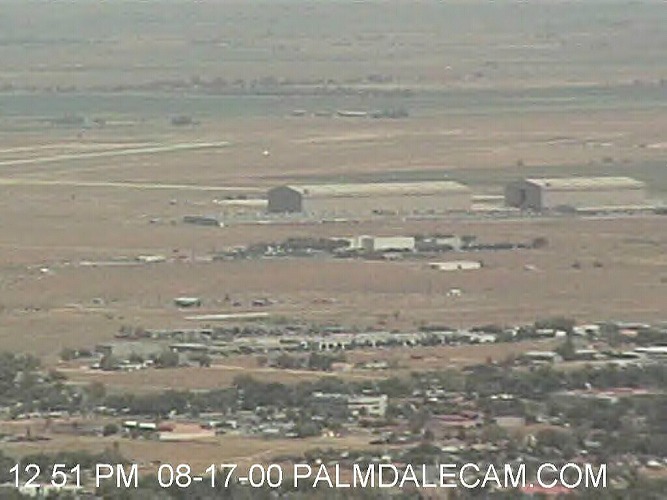 Image: Palmdale Cam
Above is Boeing's old Rockwell Hangers (Site 9). These are the ones that were up for sale by Boeing Reality Corp and bought by SR Tech. 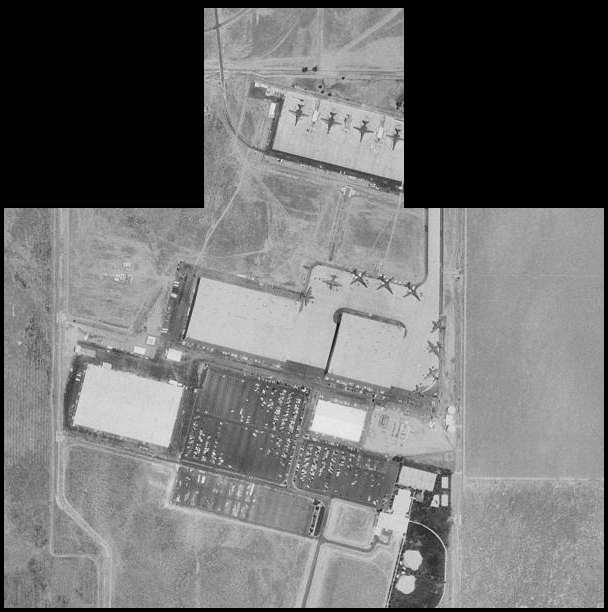 Image Source: Courtesy of United States Geological Survey
Above is the same area as in the picture above this image. This is a satellite image taken in 1994 of the Rockwell Plant, which is up for sale by Boeing Reality Corp.
Sitting outside in the sun are eight B-1B Lancers and six C-130 Hercules aircraft. These B1Bs were here for modifications. 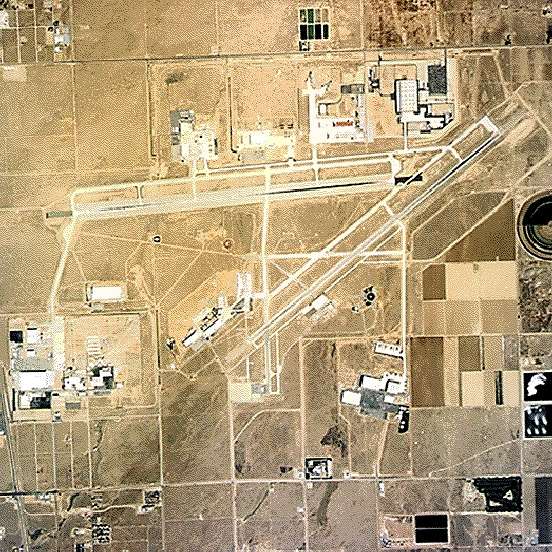 Photo Courtesy Wright Patterson AFB.
Seen here above is the whole of Plant 42.
At the top left is Boeing's Plant and Site-1
Right of this is Site-2
Next to this is Site-3 and part of Northrop Grumman
Right of this is Site-4 of Northrop Grumman and where the B-2A was constructed.
Bottom right is Rockwell's (now Boeing) site-9 that is/was up for sale
In the middle at the end of the diagonal runway is Site-7, part of Lockheed Martin
To the left of that is Lockheed Martins Skunkworks and Site-10.